A little-commented-upon aspect of the failed attack on a cruise ship off the coast of Somalia was that the pirates were driven away, at least in part, by an advanced, nonlethal, sonic weapon similar to the ones now being deployed in Iraq. The whole story is in The Sunday Times of Britain. The key paragraphs:

The Seabourn Spirit, owned by the cruise giant Carnival, was on its way from Alexandria in Egypt to the Kenyan port of Mombasa. It offers the height of luxury, with huge suites, marble bathrooms and more than one crew member to each passenger. Cruises aboard the liner cost from £6,100 for a 16-day sail to £18,270 for an epic 46-day voyage.

The liner used a sonic blaster to foil the pirates. Developed by American forces to deter small boats from attacking warships, the non-lethal weapon sends out high-powered air vibrations that blow assailants off their feet. The equipment, about the size of a satellite dish, is rigged to the side of the ship.

I don't remember seeing anything like that the last time my wife and I took a cruise, but then again we weren't on a luxury ship off the coast of Somalia.
Posted by Daniel McIntosh at 4:19 PM No comments: Links to this post

The secret is finally out

I got a good chuckle out of this. Even if you can't trust the courts, you can count on someone to screw up. From the New York Times:

WASHINGTON, Nov. 7 - In an apparent slip, a top American intelligence official has revealed at a public conference what has long been secret: the amount of money the United States spends on its spy agencies.

At an intelligence conference in San Antonio last week, Mary Margaret Graham, a 27-year veteran of the Central Intelligence Agency and now the deputy director of national intelligence for collection, said the annual intelligence budget was $44 billion.

The number was reported Monday in U.S. News and World Report, whose national security reporter, Kevin Whitelaw, was among the hundreds of people in attendance during Ms. Graham's talk.

"I thought, 'I can't believe she said that,' " Mr. Whitelaw said on Monday. "The government has spent so much time and energy arguing that it needs to remain classified."

The figure itself comes as no great shock; most news reports in the last couple of years have estimated the budget at $40 billion. But the fact that Ms. Graham would say it in public is a surprise, because the government has repeatedly gone to court to keep the current intelligence budget and even past budgets as far back as the 1940's from being disclosed.

Carl Kropf, a spokesman for the office of the director of national intelligence, John D. Negroponte, said Ms. Graham would not comment. Mr. Kropf declined to say whether the figure, which Ms. Graham gave last Monday at an annual conference on intelligence gathered from satellite and other photographs, was accurate, or whether her revelation was accidental.

Steven Aftergood, director of the Project on Government Secrecy at the Federation of American Scientists, expressed amused satisfaction that the budget figure had slipped out.

"It is ironic," Mr. Aftergood said. "We sued the C.I.A. four times for this kind of information and lost. You can't get it through legal channels."

It should be interesting to see the CIA and DNI twist themselves into knots trying to reclassify a number in the public domain.

Another thought: maybe it wasn't a mistake? If the DNI thinks the CIA's old policy is wrong, the best way to circumvent it would be to "accidently" announce the number. Let's see if it happens again next year.
Posted by Daniel McIntosh at 4:11 PM No comments: Links to this post 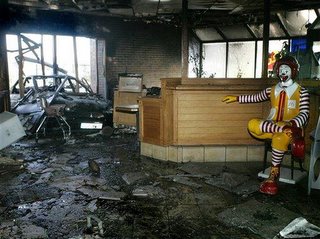 I suppose it's only a matter of time before someone makes a connection with globalization.
Posted by Daniel McIntosh at 11:27 AM No comments: Links to this post

The more I think about it, he more I'm inclined to see the central role of government as an insurance policy. Thus, the criticism that one doesn't get one's taxes worth of government misses the point. You don't pay insurance premiums hoping to receive a payout. You pay the premium in order to have the peace of mind that comes from knowing that help will be there if you need it.

But what about the other consequences of this approach? Police and fire services fit within the model, for the most part. It's very rare that a cop actually stops a crime. He comes into action in order to mitigate harm and restore the status quo. Likewise, one can make a case for a national catastrophic health care system. But unlimited welfare? No. Food stamps? No. Institutionalized government-managed charity would, in this model, be limited to short-term assistance.

Government has the added problem that it is, at least for some, a coerced insurance system. Keeping everyone "enrolled" has the effect of spreading the risk, but at the cost of the freedom to opt out. Then again, in a modern interdependent society the idea of opting out is more than a little problematic on the best of days, so that doesn't bother me all that much. What really bothers me is that it is a monopolistic coerced insurance system.

Insurance companies can raise their premiums for risky behavors. As a rule, governments don't: they simply prohibit the behaviors. For most othe risky behaviors--fire code violations, riding a motorcycle without a helmet, unprotected sex--there is little expectation of arrest, let alone a serious expectation of punishment. But whether or not one breaks the law, the payoff in a disaster is the same. Thus, it is "criminals," broadly defined, who get both freedom and support, and if they are engaged in risky activities they are also the people most likely to get a payoff. This is not a system conducive to either minimal regulation (as governments try to cut costs) or compliance with the law (as it doesn't effect payoffs). It also crowds out all non-governmental mechanisms for community and mutual support in daily life.

What would happen if taxes (premiums) could be better linked to risk? Probably they'd end up being so politicized that the current tax code would look simple in comparison. But what if there was real competition for some of the functions of government, based on competing insurers? I suspect that some people (especially the indigent and or retarded) would fall through the cracks. So maybe a competititve model could be coupled with a "mandatory minimum insurance" provision, similar to what we do now for drivers?

That sounds like it has possibilities. Not perfect, by any means. It still needs work. But it might be an improvement over what we have now.
Posted by Daniel McIntosh at 9:59 PM No comments: Links to this post