Frank Miller, arguably the best writer to work on Batman for the past couple of decades and the single biggest reason for the resurrection of the franchise, says he's writing a graphic novel where the guy with the cape does to Al Qaeda what Captain America did to Hitler during World War II. Says Miller,

Let's see how the Iranian street reacts to this cartoon.


Posted by Daniel McIntosh at 8:44 PM No comments: Links to this post

This, from the normally-reliable StrategyPage:

February 15, 2006: DNA analysis of the bodies recovered from the attack on an al Qaeda meeting in Pakistan last month, have confirmed that the main target, al Qaeda number two leader Ayman al Zawahiri, was not there. In the immediate aftermath of the attack, it was apparent that al Zawahiri was late arriving at the dinner meeting. However, the DNA tests did show that at least five foreigners were present. One of them was a close relative of Ayman al Zawahri, while a second was bomb building expert Midhat Mursi, who, like al Zawahri (who has $25 million reward on him), had a $5 million reward on his head. Another of the dead foreigners was Abdul Rehman al-Misri al-Maghribi, a son-in-law of Zawahiri and in charge of the al Qaeda's Information War operations. Another of dead was Abu Obaidah al Misri, who was in charge of terrorist operations just across the border, in Afghanistan's Kunar province.


I wonder where they got DNA samples for Al-Zawahiri and the others? Let's lift a glass tonight for the people who developed and deployed the Predator, and the people who risked their lives so that the Americans would know where to strike and when.

On a separate note, don't forget a farewell toast to the Al Qaeda leaders, and may they enjoy a quick passage to hell.
Posted by Daniel McIntosh at 10:25 AM No comments: Links to this post

Another CIA chief bites the dust

Apparently it just wasn't for leaks on his watch, but because he "wasn't with the program." From the the Times of London:

The CIA’s top counter-terrorism official was fired last week because he opposed detaining Al-Qaeda suspects in secret prisons abroad, sending them to other countries for interrogation and using forms of torture such as “water boarding”, intelligence sources have claimed.

Robert Grenier, head of the CIA counter-terrorism centre, was relieved of his post after a year in the job. One intelligence official said he was “not quite as aggressive as he might have been” in pursuing Al-Qaeda leaders and networks.

Vincent Cannistraro, a former head of counter-terrorism at the agency, said: “It is not that Grenier wasn’t aggressive enough, it is that he wasn’t ‘with the programme’. He expressed misgivings about the secret prisons in Europe and the rendition of terrorists.”

Grenier also opposed “excessive” interrogation, such as strapping suspects to boards and dunking them in water, according to Cannistraro.

Note the comments come from a past occupant of the same post. It seems a lot of professional insiders are unhappy with Bush and company, and a lot of the Bush people are unhappy with them. I have no problem with a shakeup at the CIA. They've needed it for years. But this threatens to turn the agency into something even worse that what it was before. The administration's policy on torture is as stupid as it is illegal. If that's "the program," it's time to end it.
Posted by Daniel McIntosh at 10:26 AM No comments: Links to this post

The attack plan against Iran 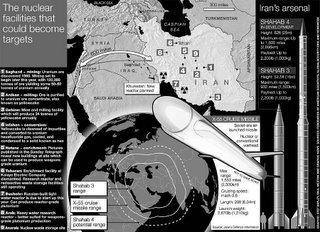 According to the News Telegraph of London,

"This is more than just the standard military contingency assessment," said a senior Pentagon adviser. "This has taken on much greater urgency in recent months."

The prospect of military action could put Washington at odds with Britain which fears that an attack would spark violence across the Middle East, reprisals in the West and may not cripple Teheran's nuclear programme. But the steady flow of disclosures about Iran's secret nuclear operations and the virulent anti-Israeli threats of President Mahmoud Ahmadinejad has prompted the fresh assessment of military options by Washington. The most likely strategy would involve aerial bombardment by long-distance B2 bombers, each armed with up to 40,000lb of precision weapons, including the latest bunker-busting devices. They would fly from bases in Missouri with mid-air refuelling.

The Bush administration has recently announced plans to add conventional ballistic missiles to the armoury of its nuclear Trident submarines within the next two years. If ready in time, they would also form part of the plan of attack.

Teheran has dispersed its nuclear plants, burying some deep underground, and has recently increased its air defences, but Pentagon planners believe that the raids could seriously set back Iran's nuclear programme.

(1) Of course the plans are being updated. It would be stupid not to.

(2) Iran is being sent a message that the US can do a lot of damage without commiting troops.
Posted by Daniel McIntosh at 6:50 PM No comments: Links to this post

My wife,who isn't especially interested in political science, asks the best questions. This morning, watching the news, it was "why are they doing this?" I tried running through the complexities and models, and quickly lost her. Then I realized I could make sense of it as the intersection of two sets of rules.

Rule (1) The first rule of Islam: There is no God but Allah and Mohammed is his Prophet. This rule made sense when unifying countless polytheist groups under a single banner, and it's still useful for prostletizing today. It makes it clear who's "in" and who's "out". It states there is only one true path, and it implies that anyone not on that true path is stupid, or evil, or both. It is not a matter of "religious tolerance". Islam is _right_ in a way nothing else can approach, and by insulting the Prophet you have insulted God.

This rule in and of itself is not sufficient to motivate violence, and there are other religions with similar rules. There are still a lot of Christian churches where rule one is that you are "born again" or forever damned.

Rule (2) The first rule of tribal society: If you have been wronged you must take revenge. Again, it's a practical rule for operating as a close-knit group in a hostile environment. By itself, it doesn't identify what is and is not a wrong.

Now combine rules (1) and (2). By publishing these cartoons God has been wronged and we must avenge.

This would explain, by the way, why we don't see such a violent reaction among Muslims outside of the Arab world (or immigrants with a strong connection to those cultures). Both rules have to come into play to create the effect.

I'd be the first to admit this is simplistic. But to the extent that it is true, there are two long-term solutions:

I doubt option (1) is possible (as well as being immoral). It seems the long-term policy, therefore, has to be option (2). Democratize, modernize, globalize, whatever you want to call it, the point is to get enraged people to go to the courts and the ballot box, not to the street.

Addendum (2.17.06): My wife read the above and commented that I didn't really get to the root of her question. She was especially interested in where are that rage comes from. She's right; there's much more going on than the sort of 'reasoned anger' suggested by the post above. And, as she observed, much of that rage is related to a general sense of being harmed by the imperialists. This, in turn, is encouraged by regimes (and others) who want to deflect criticism of themselves by pointing to a scapegoat.

Sometimes I wonder if the best thing we (the 'West') could do would be to pull out and take away the scapegoat. It wouldn't work. As long as we exist, we can used as an excuse for indigenous failures. Israel, of course, can't pull out, nor should it have to stand alone. And in an interdependent world, especially with an oil economy, what happens there will inevitably have a major impact here.

(Damn. I wish there were easy answers.)
Posted by Daniel McIntosh at 12:31 PM No comments: Links to this post