A few questions and observations:

Bhutto was shot in the same park where Pakistan’s first prime minister, Nawabzda Liaquat, was assassinated in October 1951. Was that intended to serve as a message, or was this just the most convenient place to strike?

The assassin shot her, and then blew himself up. Is that a normal pattern for Rawalpindi (a city with over 50 suicide bombers last year, as I recall)? If he had already succeeded, why would he blow himself up? Just to avoid questioning? It doesn't feel right.

No conclusions. Just thinking out loud.

Posted by Daniel McIntosh at 10:42 PM No comments: Links to this post 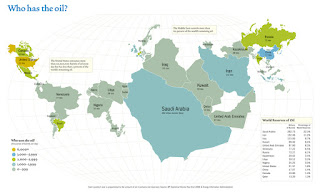 James Joiner, over at OTB, has published a map where the area of the country is proportionate to its share of known oil reserves.

I have a few points to add. First, these are known reserves. Two weeks ago Brazil announced finding oil fields to rival (or surpass) Venezuela. One part of the contest between Russia and Canada over the north pole is the prospect for as-yet undiscovered oil. Second, available oil is always at a given price. Change the price and you change the amount it can be profitable to produce. Third, I don't trust the estimates from the governments of Saudi Arabia and Iran. Influence in OPEC--and one's portion of the oil to be released-- is directly related to national estimates of reserves. Every country--and probably Saudi Arabia tops the list--has reasons to overestimate what they have.

Nevertheless, it's a sobering reminder of why the middle east looms so large in American (and everyone else's) strategic calculations.
Posted by Daniel McIntosh at 6:31 PM No comments: Links to this post 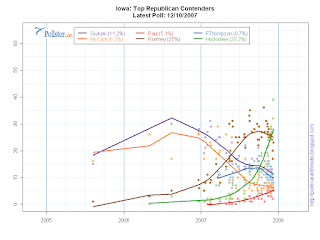 At present, it looks like only two contenders are growing in support in Iowa: Huckabee and Paul. Huckabee (green line) has the explosive growth, of course, but that may run into a ceiling. Paul (red line) is just beginning to take off.

In elections, it's not just about being number one, it's about when you are number one. Timing is everything. And in a caucus state, where people get to change their minds during the process, trends are especially important.

There may be a lot of surprised (and angry) pundits in a few weeks.

Posted by Daniel McIntosh at 11:10 AM No comments: Links to this post

Email ThisBlogThis!Share to TwitterShare to FacebookShare to Pinterest
Labels: election

Zenpundit has another great discussion. This time it's on the relative importance of size and homogeneity for economic and political success. The answers, whatever they are, will help to define the shape of the world. I'll repeat my small contribution here:

Most of the better points have already been made (especially Phil on hyperpolarity and Dan txdap on variance), but I’ll add my two cents.

Size matters if there are economies of scale. Economies of scale matter most in head-to-head competition in a relatively stable environment. It also allows one more capital to throw into a project. The costs of scale are that it is more difficult to make rapid changes, or to learn from the experience of others. If, as Robb suggests, we are in a world requiring quick adaptation to asymmetric challenges (economic or security) there is a maximum size beyond which states no longer make sense, and that size may be shrinking.

Instead of unitary states or multiethnic empires, the capital accumulation problem can be handled by federations, common markets, etc. Ethnic (or cultural) autonomy promotes experimentation, but a few limited common institutions allow those experiments–if successful–to be adopted, by consensus, on the larger scale. Diversity allows choices and commonalities allow mutual support. The result looks something like the alliances among airlines (for frequent flier programs and landing rights) or among microchip manufacturers (for R and D).

And has anyone been noticing what’s happening to Belgium lately? It’s not Nigeria, by any means, but it’s getting more difficult to put together a government.

So how about this vision of the future: thousands of microstates (and virtual states) linked into networks of overlapping interest. One state will be in multiple networks, depending on issues. Any pair of states could in competitive networks and in cooperative networks at the same time.

Come to think of it, we’re not so far from that today. Fragmentation within states, coupled with regional and global institutions.

I recommend you take a look at the whole thing.
Posted by Daniel McIntosh at 11:55 AM No comments: Links to this post