It's a mistake to think that one can simply buy an election.  Money is important in a system where access to media can be so expensive, but in itself it isn't enough.  What the money trail can show, however, is where the people investing their cash think their interests lie.  It can also show us how many people are willing to put their money on the line, and by looking at the percentage of their resources invested we can get some idea of the strength of their feelings.  With that in mind, compare the organizations and their members associated with three major candidates for president in 2012: 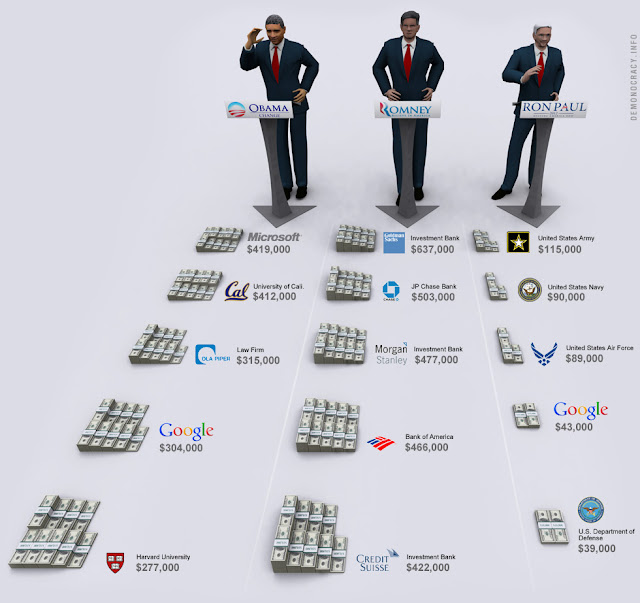 Also note that a government agency can't invest in a political campaign.  That means that Paul's money came not from the organizations directly, but from the troops and civilians whose lives are most directly on the line when it comes to issues of war and peace.  These are also the people who have the least money to contribute.  When considered as a percentage of their wealth the pattern is even more remarkable.

Posted by Daniel McIntosh at 3:42 PM No comments: Links to this post

There's an interesting study out from Harvard and Brookings using a randomized experiment to measure how vouchers for elementary students to private schools in the 1990s affect their enrollment in college.  Apparently, there's no significant change in overall college enrollment, but among African-American students the effect is large, statistically significant, and positive--a twenty-four percent increase.  It is also associated with significant increases for full-time college attendance, enrollment in selective four-year schools, and enrollment in private four-year colleges.

Evidently, as experiments like Head Start showed several years ago, a little bit of help at an early age can make a major difference for some people later on.  How interesting that one of the better ways to help African-American students get an education--and a better life--is to get them out of the private public schools.

My mother is a retired public school teacher.  My father was a principal in St. Louis, eventually ending up in charge of the school for juveniles held in jail.  I know how hard they worked.  I know the horror stories they'd bring home.  I also know--as they did--that the present system has some fundamental problems.  It tells you something that my Dad was happiest at the prison school: he found it better for the students, and more conducive to learning, than the standard public school.  He even had students who admitted to getting arrested in order to get back into his school.  What does that tell us about the public alternatives?

Posted by Daniel McIntosh at 11:29 AM No comments: Links to this post

Where is Prince Bandar?


Here's what we know.  On July 18th a bombing in Damascus killed several senior officials in Syria, including the Minister of Defense and a brother-in-law of President al-Assad.  On July 19th, Prince Bandar bin Sultan, long associate of the Bush family, former ambassador to the US, famous for his role in getting Saudis out of the US in the immediate aftermath of 9/11, and in relative eclipse the past few years, was appointed President of General Intelligence for the government of Saudi Arabia.  On July 22nd a bomb detonated in the headquarters of Saudi intelligence, killing the deputy Chief of Intelligence.


There are no reports of Prince Bandar being seen since the explosion.


There are no reports indicating that he was killed or wounded.


There are no statements from the Saudis or the White House refuting rumors of his death.


There are no reports on his location or status, period.


Now we get into speculation.  It's not like there aren't a number of people who would like to plant a bomb in Saudi intelligence HQ.  The coincidence with the Syrian operation is probably, in fact, a coincidence.  Besides, they have enough going on at home to stretch their capabilities past the point where they could do something like this (especially on such short notice).  If the bomb could be tied to Iran it would be an act of war, so even if there are indirect connections it's unlikely we'll find anything substantial.  Besides, it's probably not in Iran's interests to take that kind of risk, and it would take time to set up.  There have been successful attacks on Saudi intelligence in the past, but these have usually been attributed to internal dissidents, with general support from the Syrians and/or Iranians.


Yet another possibility:  perhaps factions of the Saudi elite are in conflict with one another. It wouldn't be the first time, although usually without open violence.  At the very least, an internal opponent to Bandar--a man who has made some enemies--could have looked the other way, leaving the door open to an attack by one of several groups.
The first task, of course, is to confirm what has happened.
How odd, though, that so little has been made of this in the press. Bandar was/is a "rock star" in the Saudi establishment with long and substantial ties to the US. The silence is almost deafening.


There's nothing like the politics of the Middle East to lend itself to conspiratorial thinking.  The fact is, however, there's still a lot that we simply don't know.

Posted by Daniel McIntosh at 3:52 PM No comments: Links to this post